Title: The Palace of Whitehall

Description: These three extensive images represent Inigo Jones design for the Palace of Whitehall in 1639. They were published by the Architect Colen Campbell in his landmark Vitruvius Britannicus. The engraving was performed by Henry (Henrick) Hulsbergh between 1715 and 1717. Would look stunning on an office or study wall!

Early 18th century engravings of the Palace of Whitehall 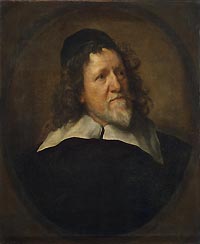 Inigo Jones (1573 - 1652) is regarded as the first significant British architect.
Beyond the fact that he was born in the vicinity of  Smithfield in central  London the son of a Welsh Catholic cloth-worker, little is known about Jones' early years. Towards the end of the  16th century he became one of the first Englishmen to study architecture in  Italy, making two visits to that country.
The first c.1598-1603 was possibly funded by Roger Manners, 5th Earl of Rutland. The second, from 1613 to 1614, found Inigo accompanied by the Earl of Arundel. His work then became particularly influenced by  the highly original and much imitated Italian architect Andrea Palladio 1508-1580 & to a lesser extent, he also held that the setting out of buildings should be guided by principles first described by ancient Roman writer Vitruvius.

A long association with the English court as a theatrical designer and an architect began in 1605 under King James I and continued through the reign of King Charles I. Jones designed fantastic settings and costumes for dozens of the elaborate court entertainments called masques

In 1615 Jones took the post of Surveyor General of royal buildings to King Charles I - who was deposed and executed by Oliver Cromwell (1600-1649) - Jones career effectively ended with the outbreak of the Civil war. He was also a splendid painter and theatre artist.

Jones' best known buildings are the  Queen's House Greenwich, London started in 1616, his earliest surviving work Banqueting House at Whitehall (1619) - part of a major modernisation by him of the Palace of Whitehall - which also has a ceiling painted by the Prolific Flemish baroque painter Peter Paul Rubens. He was knighted by the English king Charles I (1577-1640) .

Colen Campbell (1676-1729) born in Nairnshire, Scotland, initially he trained to be a lawyer who subsequently took up architecture. Vitruvius Britannicus was the first English architectural publication since Elizabethan times, & catalogued the work of great architects of the time,  including Indigo Jones and Sir Christopher Wren, as well as Campbell himself.It was a time when Britain was growing tired of the excesses of the ornate Baroque period and returning to classical or Neo-Palladian architecture.   It was also the beginning of a building boom amongst the aristocracy and Whig politicians of the day.  Campbell's work secured him many commissions and for a short time he served as a government advisor.

Campbell was heavily influenced by the architect James Smith, whom he described in 'Vitruvius Britannicus' as the 'most experienced architect' in Scotland. However, it was Richard Boyle, the third  Lord Burlington who would ensure Campbell's success.

Once 'Vitruvius Britannicus' had brought Campbell to his attention, Burlington quickly employed the Scottish architect. He replaced James Gibbs as the architect of Burlington House, now the Royal Academy in London. And, in 1718, with Burlington's influential backing, Campbell was appointed deputy to the Surveyor General of the Royal Board of Works.

Vitruvius Britannicus - His major published work, Vitruvius Britannicus, or the British Architect... appeared in three volumes between 1715 and 1725. (Further volumes using the successful title were assembled by Woolfe and Gandon, and published in 1767 and 1771.) Vitruvius Britannicus was the first architectural work to originate in England since John Shute's Elizabethan First Groundes. In the empirical vein, it was not a treatise but basically a catalogue of design, containing engravings of English buildings by Inigo Jones and Sir Christopher Wren, as well as Campbell himself and other prominent architects of the era.

Henry Hulsbergh is the Anglicized name of Hendrick Hulsberg, a Dutch engraver, active in London, who died in 1729.   He engraved a number of maps for John Senex, and also engraved many architectural images for such works as Colen Campbell's Vitruvius Britannicus