Back to: Transport | London 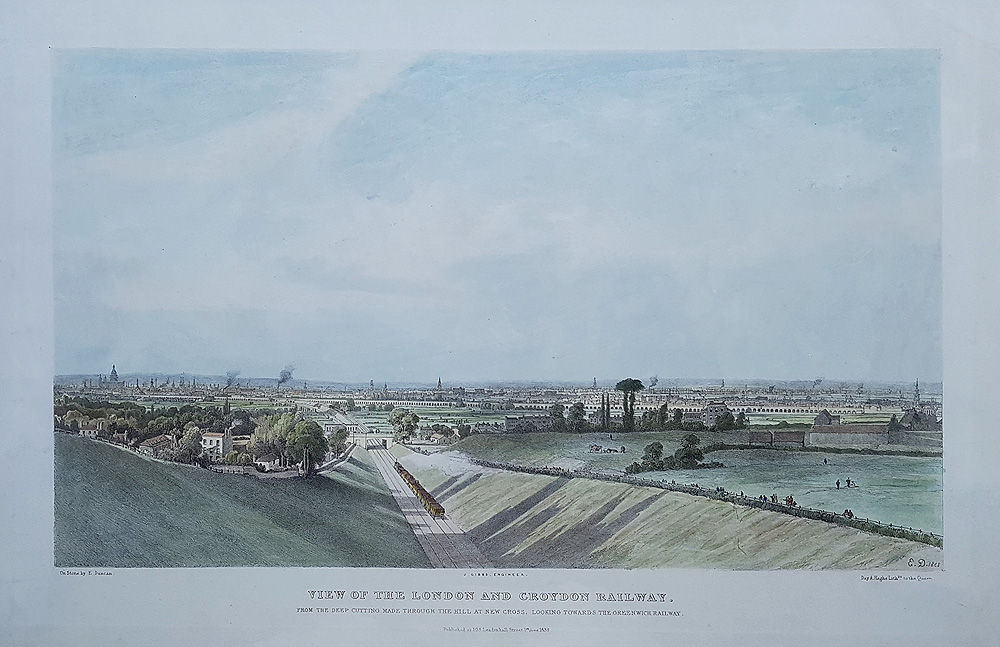 Title: View of the London and Croydon Railway 'from the deep cutting made through the hills at New Cross, looking towards Greenwich Railway'. 'J. Gibbs, Engineer.'

Publication: 'Published by Day & Haghe Lithrs to the Queen at 105 Leadenhall Street.'

Description: Details the impact on the landscape by these new railways, a deepcutting reveals a steam locomotive travelling towards London. The London and Croydon Railway opened during the period known as 'railway mania' when railways proliferating across the country. This specific route joined the Greenwich line at Corbett's Lane Junction with railways terminated at London Bridge. In order to prevent collisions, the world's first 'signalbox' was constructed at Corbett's Lane in the late 1830s.

Antique Railways Print - View of the London and Croydon Railway 1838

Edward Duncan (1803-1882) lived and worked in London and was a watercolourist of landscapes, aquatint engraver and lithographer of marine, sporting and topographical views after his contemporaries. He was apprenticed to R. Havell I, from which he learnt to engrave. From circa 1825 he began to aquatint marine subjects after W. J. Huggins, whose daughter, Bertha, he married. From 1828 he also engraved sporting subjects particularly after J. Ferneley and C. Hancock. In the 1840's he gave up engraving to concentrate on his watercolour painting.