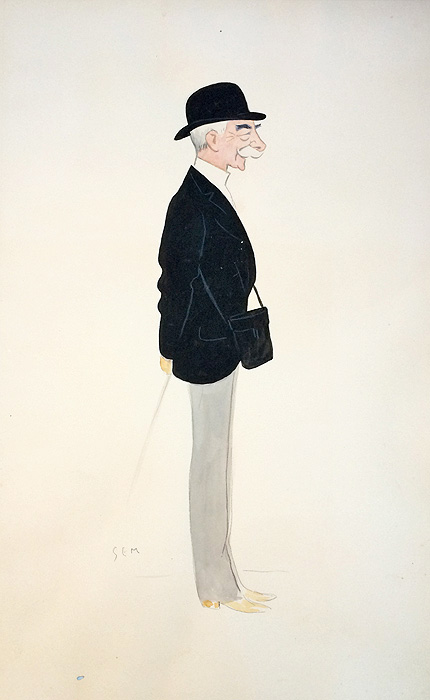 Georges Goursat (1863–1934), known as SEM, was a French caricaturist famous during the Belle Époque.

Georges Goursat was born and raised in an upper-middle-class family from Périgueux. The wealth inherited from his father at the age of 21 allowed him to sustain a gilded youth.In 1888 he self published in Périgueux his first three albums of caricatures, signing some as "SEM" allegedly as a tribute to Amédée de Noé who signed his caricatures for Le Monde illustré as "Cham".

From 1890 to 1898, he settled for a few years in Bordeaux. During this period, he published more albums and his first press caricatures in La Petite Gironde and discovered the work of Leonetto Cappiello. His style matured, becoming both simpler and more precise. During the same period, he made trips to Paris. In 1891, he designed two posters printed in the workshop of Jules Chéret for the singer Paulus. He published his first caricatures of artists in L'Illustration and Le Rire (Paulus, Polin and Yvette Guilbert. From 1898 to 1900, he lived in Marseille. During this stay, he met Jean Lorrain who convinced him to live in Paris.

Aged over 50 at the start of World War I, Goursat was not drafted.[20] He nevertheless involved himself as a war correspondent for Le Journal.[20] Some of his rather "chauvinistic" articles had an "enormous impact".[21] Ten were published in 1917 in Un pékin sur le front. Two others were incorporated in 1923 in another book, La Ronde de Nuit. In 1916 and 1918 Goursat published two albums of Croquis de Guerre (War sketches). Their style is completely different from his previous work. He also designed posters for war bonds.

After the war, Goursat came back to the kind of caricatures that made him famous. In 1919, he published Le Grand Monde à l'envers (High Society upside down). Around 1923, he published three albums under the general title of Le Nouveau Monde. In 1923, he was made an officer of the Légion d'honneur. In 1929, he was severely impoverished by the economic crisis. After a heart attack in 1933, he died in 1934.