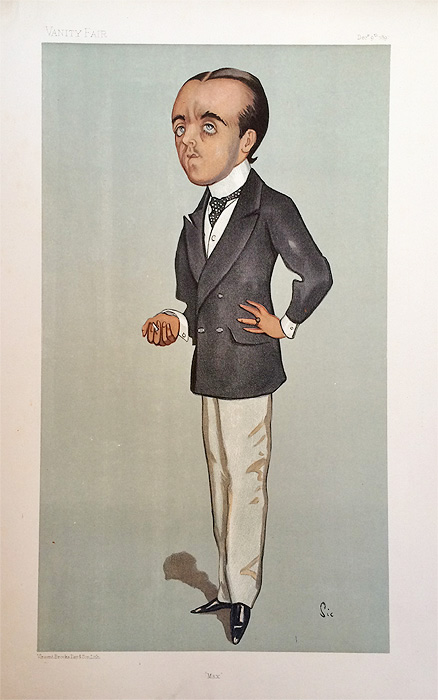 In the 1890s, while a student at Oxford University, Beerbohm showed great skill at observant figure sketching. His usual style of single-figure caricatures on formalised groupings, drawn in pen or pencil with delicately applied watercolour tinting, was established by 1896 and flourished until about 1930. In contrast to the heavier artistic style of the Punch tradition, he showed a lightness of touch and simplicity of line. Beerbohm's career as a professional caricaturist began when he was twenty: in 1892 the Strand Magazine published thirty-six of his drawings of 'Club Types'. Their publication dealt, Beerbohm said, "a great, an almost mortal blow to my modesty".

The first public exhibition of his caricatures was as part of a group show at the Fine Art Society in 1896; his first one-man show at the Carfax Gallery in 1901. He was influenced by French cartoonists such as "Sem" (fr:Georges Goursat) and "Caran d'Ache" (Emmanuel Poir). Beerbohm was hailed by The Times in 1913 as "the greatest of English comic artists", by Bernard Berenson as "the English Goya", and by Edmund Wilson as "the greatest... portrayer of personalities – in the history of art".

His collections of caricatures included Caricatures of Twenty-five Gentlemen (1896), The Poets' Corner (1904), Fifty Caricatures (1913) and Rossetti and His Circle (1922). His caricatures were published widely in the fashionable magazines of the time, and his works were exhibited regularly in London at the Carfax Gallery (1901–08) and Leicester Galleries (1911–57).