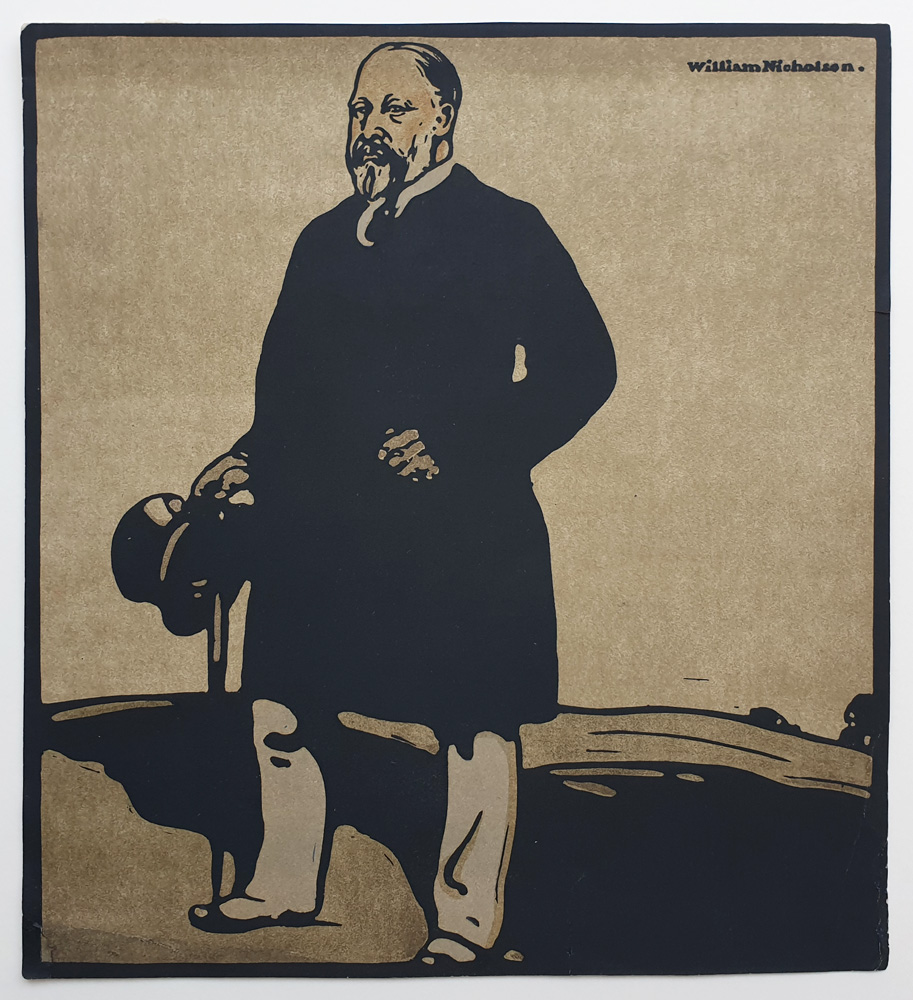 Title: H.R.H. The Prnce of Wales

Description: Lithograph of a hand coloured woodcut. Seven portraits were published in the New Review had been on sale since 1897 in the form of individual lithographic reproductions of the original hand-coloured woodcuts. In 1899, the portraits commissioned to make up the set of Twelve Portraits.

Sir William Newzam Prior Nicholson 1872 - 1949
Painter, print-maker and theatre designer. His father was a member of Parliament and he was sent to study art at the Academie Julian in Paris. He started his career as a designer of posters and as a book illustrator but soon became an innovative and celebrated maker of woodcuts. He broke ground with his experimental techniques Nicholson's first success as a graphic artist with a poster for a production of Hamlet. Many of Nicholson's contemporaries were influenced by Japanese woodblocks and the black-line cuts of 15th century Italian artists. Nicholson, however, was inspired by woodblocks in English 'chapbooks' (cheaply produced popular pamphlets) and by the 'primitive' character of old woodblocks which he discovered in a Newark bookshop. He first trained at the Bushey School under Hubert von Herkomer from 1888-9 and then travelled to Paris where he studied at the Academie Julian from 1889-90. Here he met James Pryde whose sister Mabel he married in 1893. Under the name of `J and W Beggarstaff' he and Pryde designed posters between 1893 and 1899; he also produced woodcuts published by Heinemanns between 1896 and 1900 In 1894, Nicholson began collaborating on poster designs with his brother-in-law James Pryde and the two became known as the JW Beggarstaff. Over the winter of 1896 to 7 Nicholson produced one of his most famous graphic works. An Alphabet begins with 'A was an Artist'. This print was an ironic self-portrait showing Nicholson as a pavement artist. Other prints ranged from Elizabethan to modern subject matter. 'G is for Gentleman' was a traditional subject; 'U is for Urchin' was more contemporary. Another departure from tradition was the exclusion of moralising verses. As early as 1890 the artist had begun to make woodcuts and experiment with addition of subtler tints of green, ochre and umber to black and white images. He soon became known for his skill in the medium, elevating the art form aesthetically and commercially. In 1897, Nicholson produced his most celebrated portrait, Queen Victoria, which became one of the most famous British prints ever made.The publisher’s prospectus of 1897 advertised three formats of this work: The Popular Edition, lithographed in colours on cartridge paper, for 5s.-2d., The Library Edition, lithographed in colours on Dutch hand-made paper, in cloth for 12s.6d., and The Edition de Luxe, printed from the original woodblocks, hand-coloured and signed by the artist, for 12 pounds, 12s. net. Nicholson's commemorative print celebrated Queen Victoria's diamond jubilee in 1897. This was published in Twelves Portraits From 1898 he exhibited at the International Society of Sculptors, Painters and Gravers being influenced by James McNeill Whistler who was President. In 1904 he was a founder member of the Society of Twelve, and held his first one-man show at the Paterson Gallery in 1906. He was also responsible for several theatre designs including the original sets for Peter Pan in 1904. Although perhaps not suited to a career as a portraitist, Nicholson painted portraits throughout his life and despite his detachment form artistic public life, was knighted in 1936. His finest portraits depict sitters with whom he was in sympathy, excelling in his portrayal of close friends. He was knighted in 1936, and his work is represented in a number of museums, including the Tate Gallery in London The woodcuts were published trimmed to the borders and mounted on cards many of which were signed in pen and ink;, in excellent condition Later the prints were transferred to lithographic plates;and sold either in deluxe Folio format or as bound books on thick hand made wove paper. An Alphabet (1896), An Almanac of Twelve Sports (1898), London Types (1899), and Twelve Portraits (1899/1900). Nicholson (1872-1949) was paid the princely sum of £5.00 by Heinemann for each woodcut and a further sixpence for colouring those in the De luxe edition (apparently he was capable of finishing thirty to forty a day). The first edition of the Popular series were sold out by 1 January 1898. The model for the beggar in this image is in fact James Pryde, Nicholson's brother in law and partner in the their collaboration as the poster designers 'J. & W. Beggarstaff'